Today's big achievement has been to solve a software reliability issue which had caused the completion work to grind to nearly a halt and resulted in the work of creating the Ngatapa and Matawai-Wairata map sets to be stalled for a few days. We achieved this by using a virtual machine to install an older software version running on Debian 9. This means the project is now much more back on track, though it is still behind and will be about two weeks late by the time this volume is finally finished. This means possibly the subsequent volumes will have to be cut back in scope to resume the required pace of work, so Volume 6 might not get any additional Comprehensive coverage over that completed in the Wellington area, and Volume 4 over that completed in the Whanganui area. However if the pace of completing those two which are the next volumes in the schedule goes well, additional coverage could be provided for them.

Regardless of the delays and extensions to the Volume 5 production schedule, we still need a week of downtime as soon as Volume 5 is released. We have today completed the 2017 updates to maps between Gisborne and Makaraka using the 0.1 metre urban imagery to replace either 2012 0.125 imagery or 2017 0.3m imagery. This is the maximum extent to which we are updating 2012 0.125m imagery.

The other work completed today has been the new aerial images around Beach Loop (covering 1942, 1962 and 1986) and adding the boulder pit siding at Maraetaha. This completes the planned extent of updates between Westshore and Gisborne. This means we can now move rapidly down to Napier to complete some siding labelling around the Port but no additional aerial images will be added. From here on in, the focus is using the current aerial imagery (current or historic) that we already have and doing final checking for completeness against other data sources and no new historical imagery will be put into the maps. 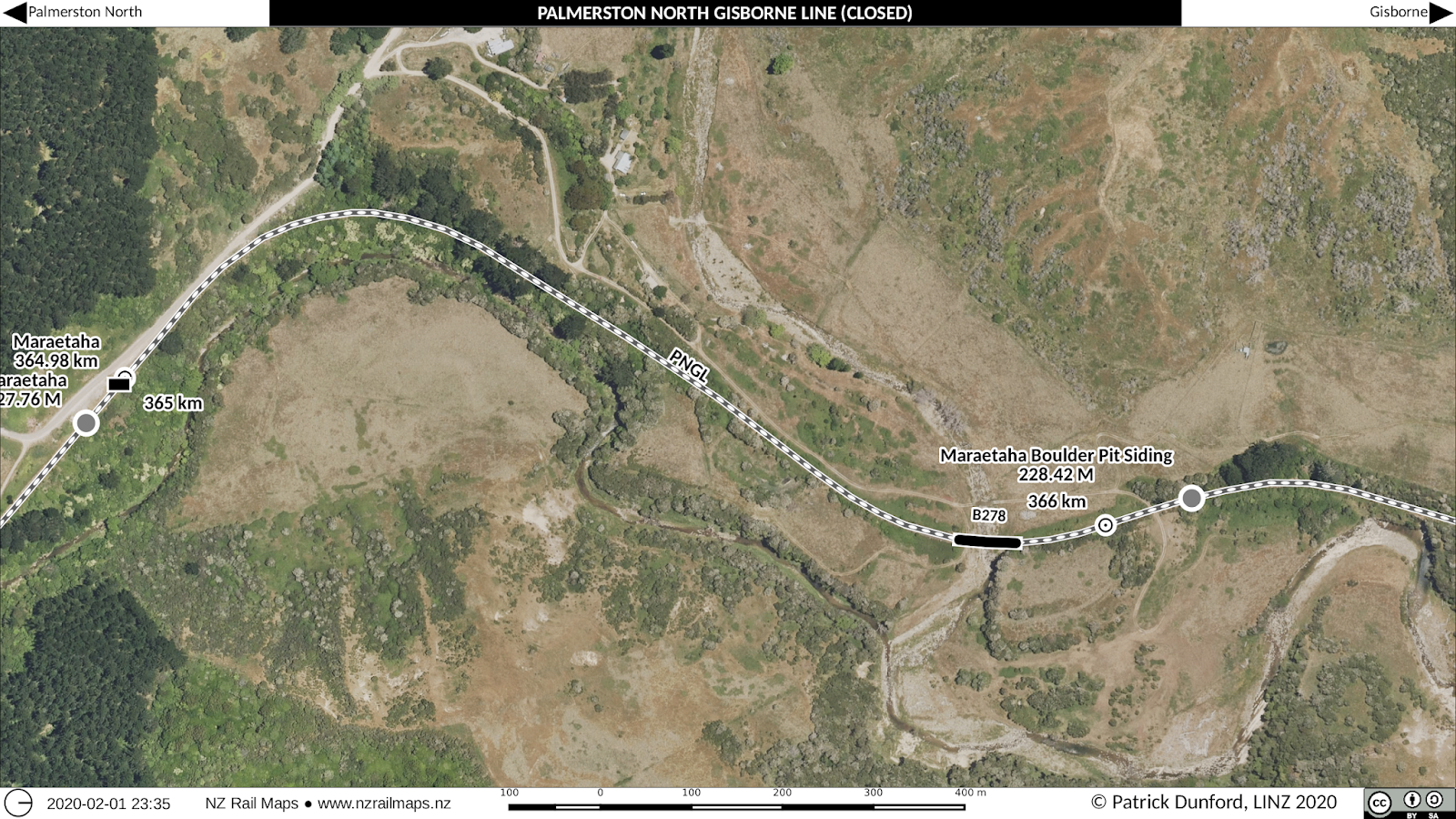 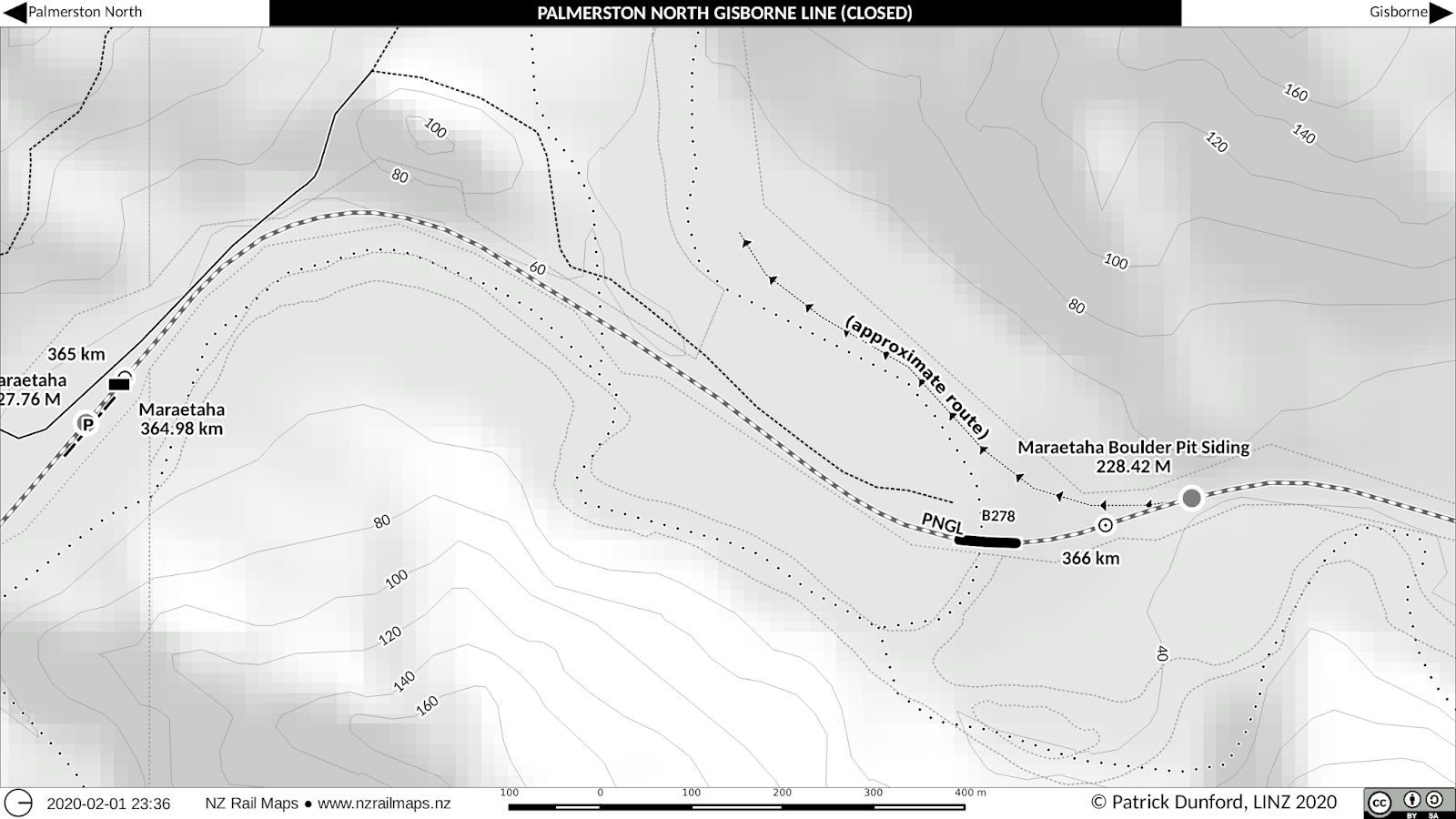 Boulder Pit Siding near Maraetaha. The dates when it was in operation being unknown at this time. 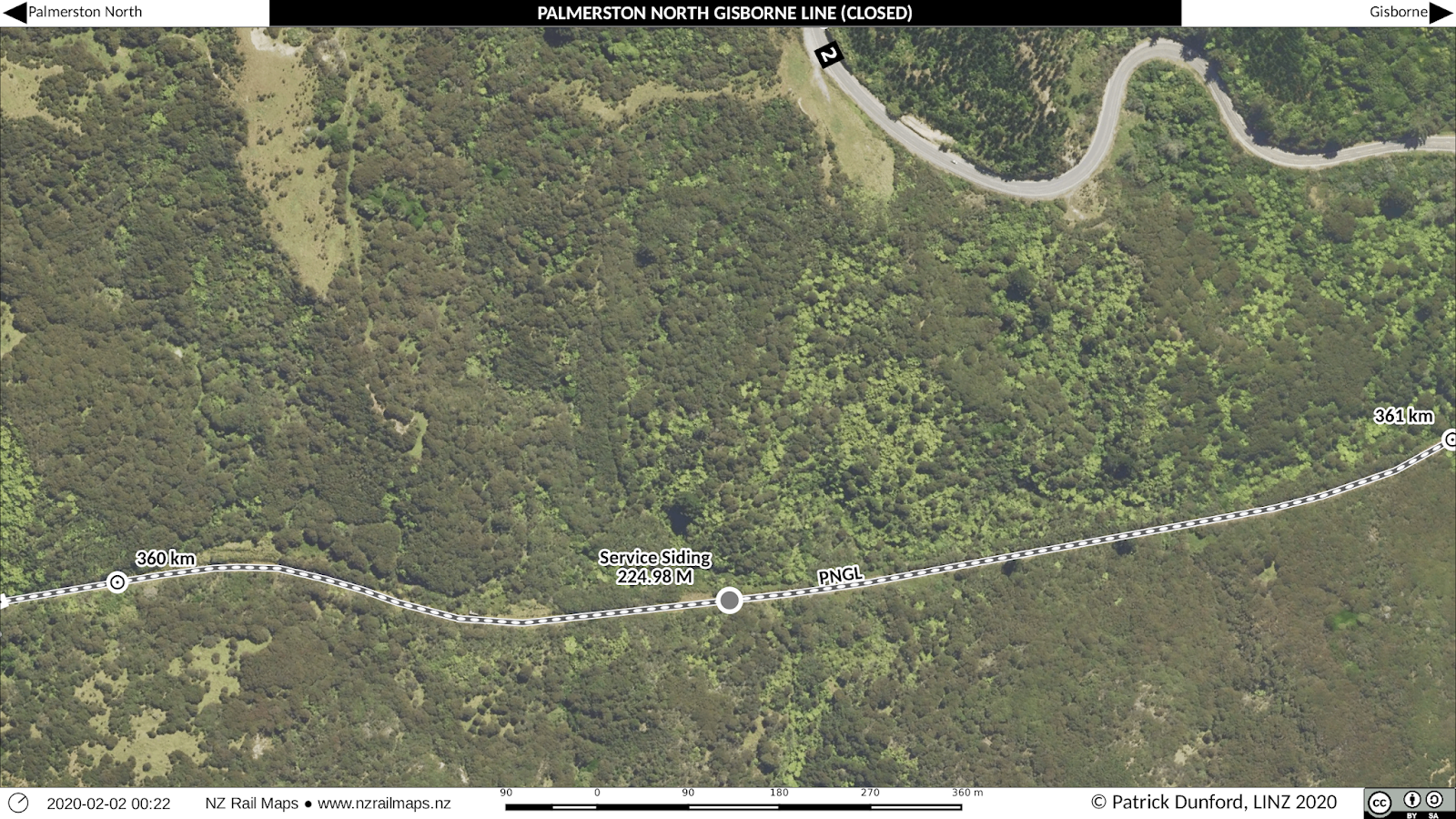 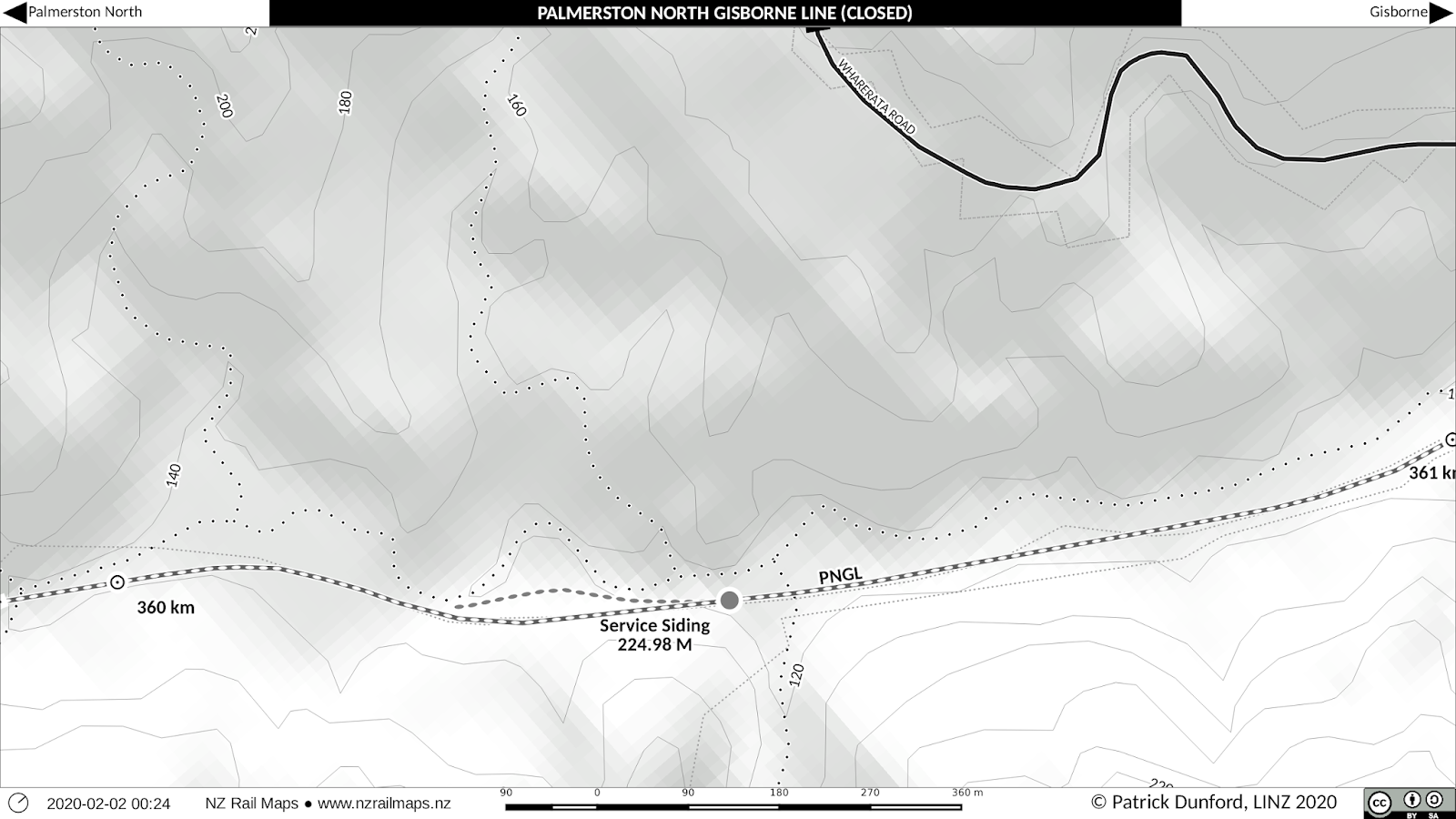 Service Siding controlled by switchlock 22478 as shown in S&I DIagram No. 1276 of 1968. The number of service sidings in the area which were invariably of a short term nature (there is no trace of this one today, nor the one off switchlock 21845 between Paritu and Beach Loop) suggests a considerable number of them were built as track diversions to deal with washouts and slumps. This is another illustration of how difficult this section of the PNGL has been to keep open. 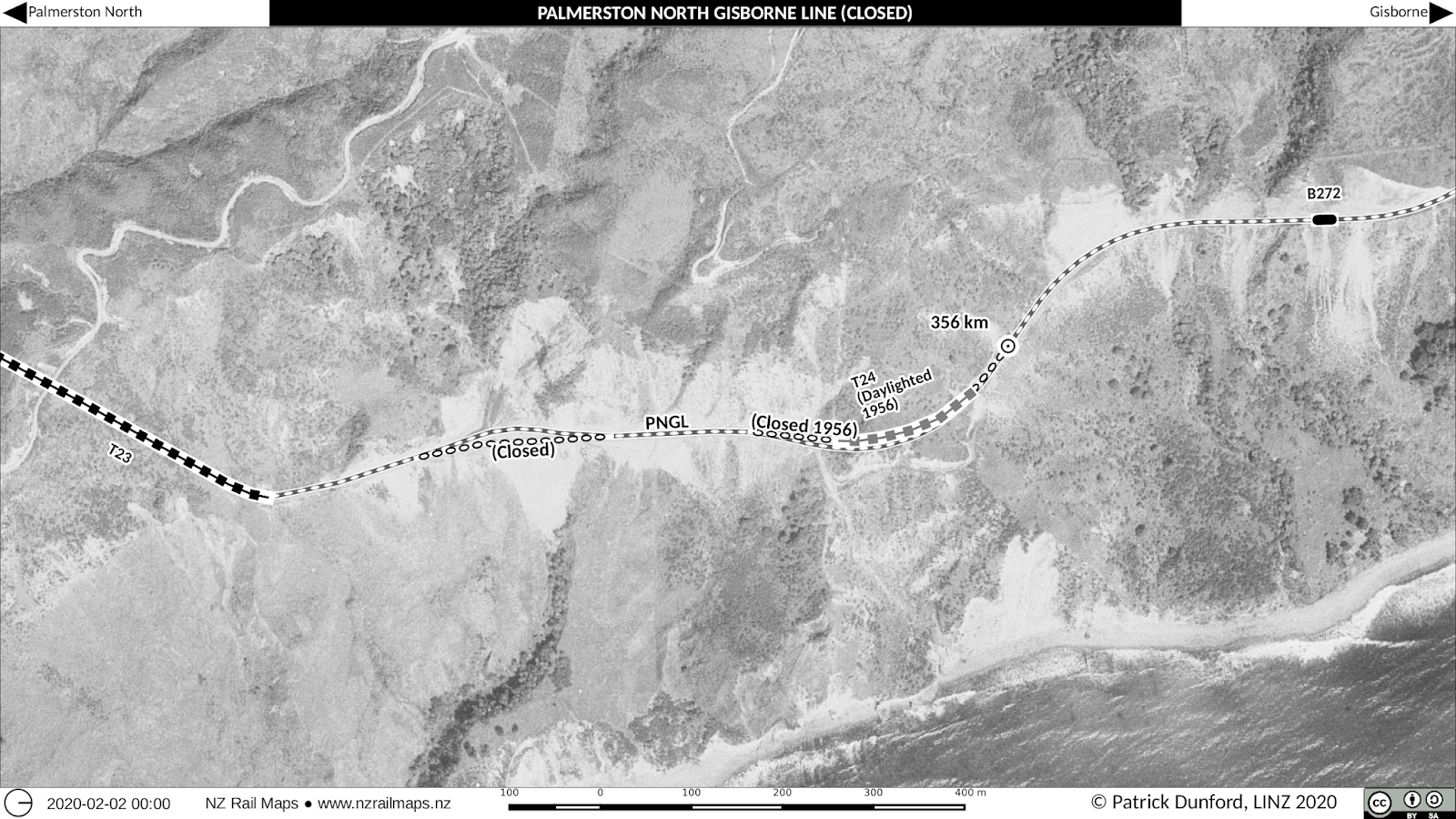 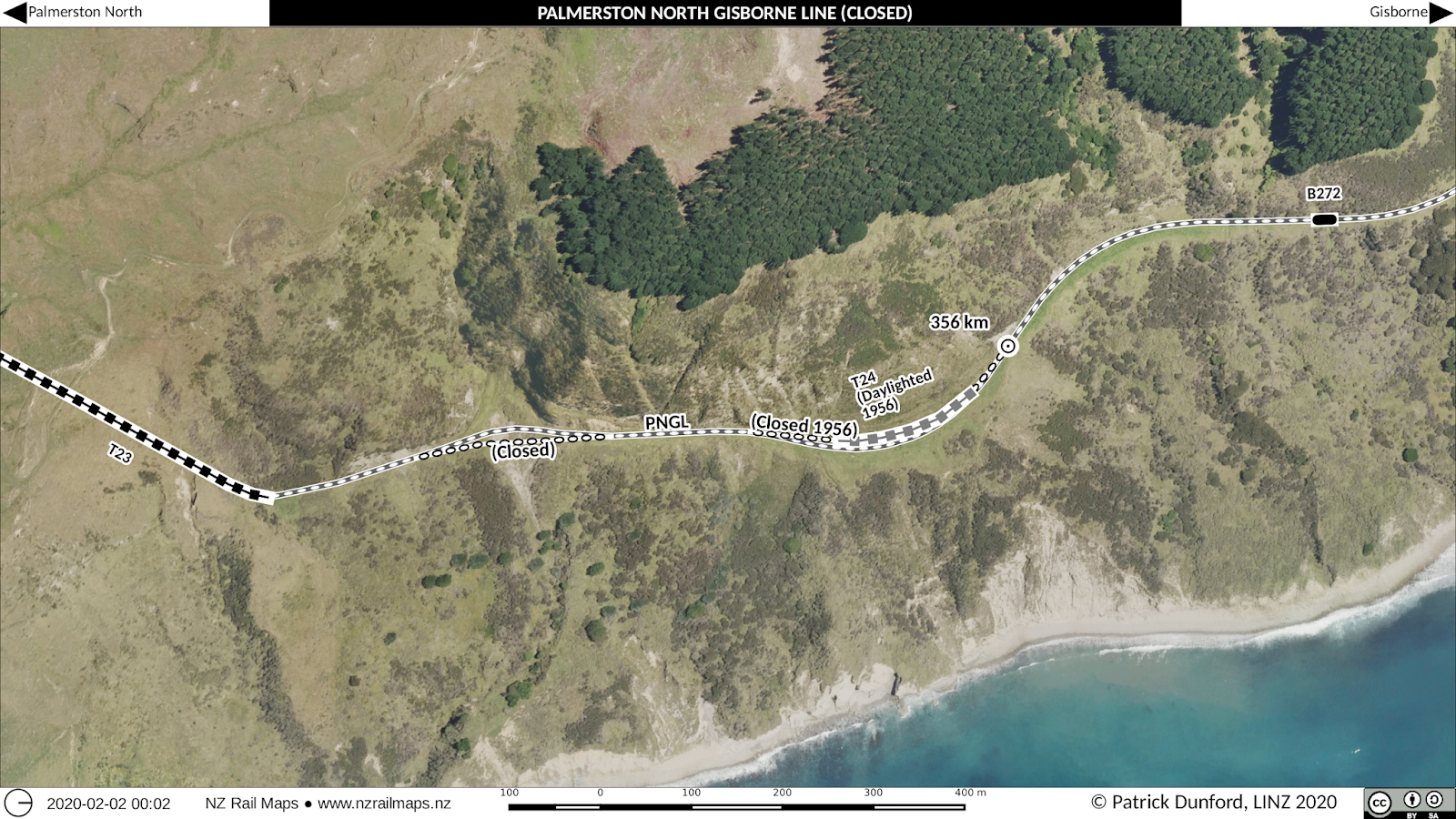 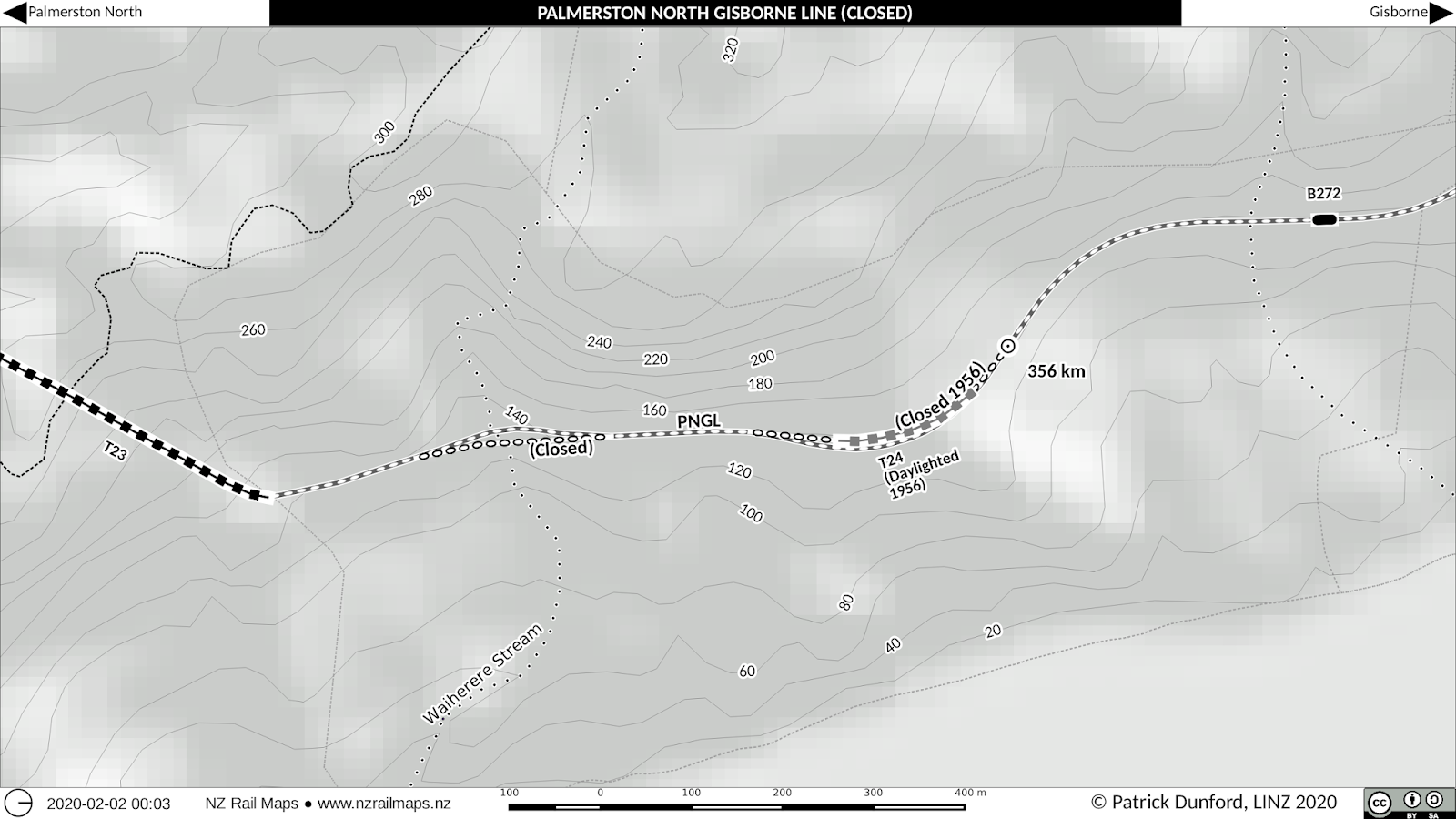 These maps around the extinct Tunnel 24 show two route changes: T24 itself, and another one made at the site of a current washout just a little south of the tunnel. The map shows as "Closed" the original route the line took in 1942, which at some later time was diverted. It seems highly likely the diversion line that was pushed on a curved route up the hill became the permanent route, allowing for what was probably a slump or washout below to be stabilised to protect the new embankment. As the 2017 imagery shows, there is a washout in this location that has undermined the current track. 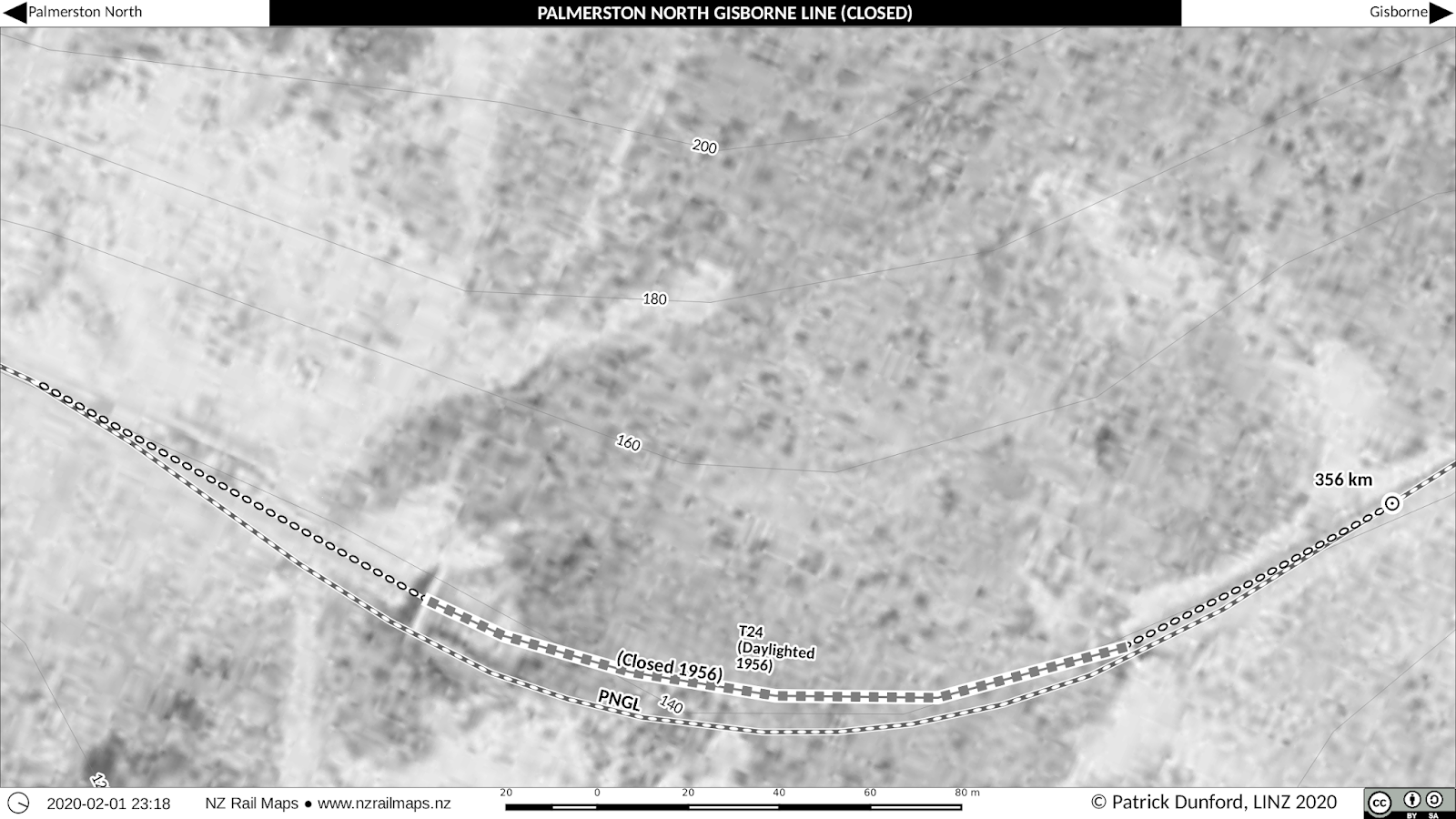 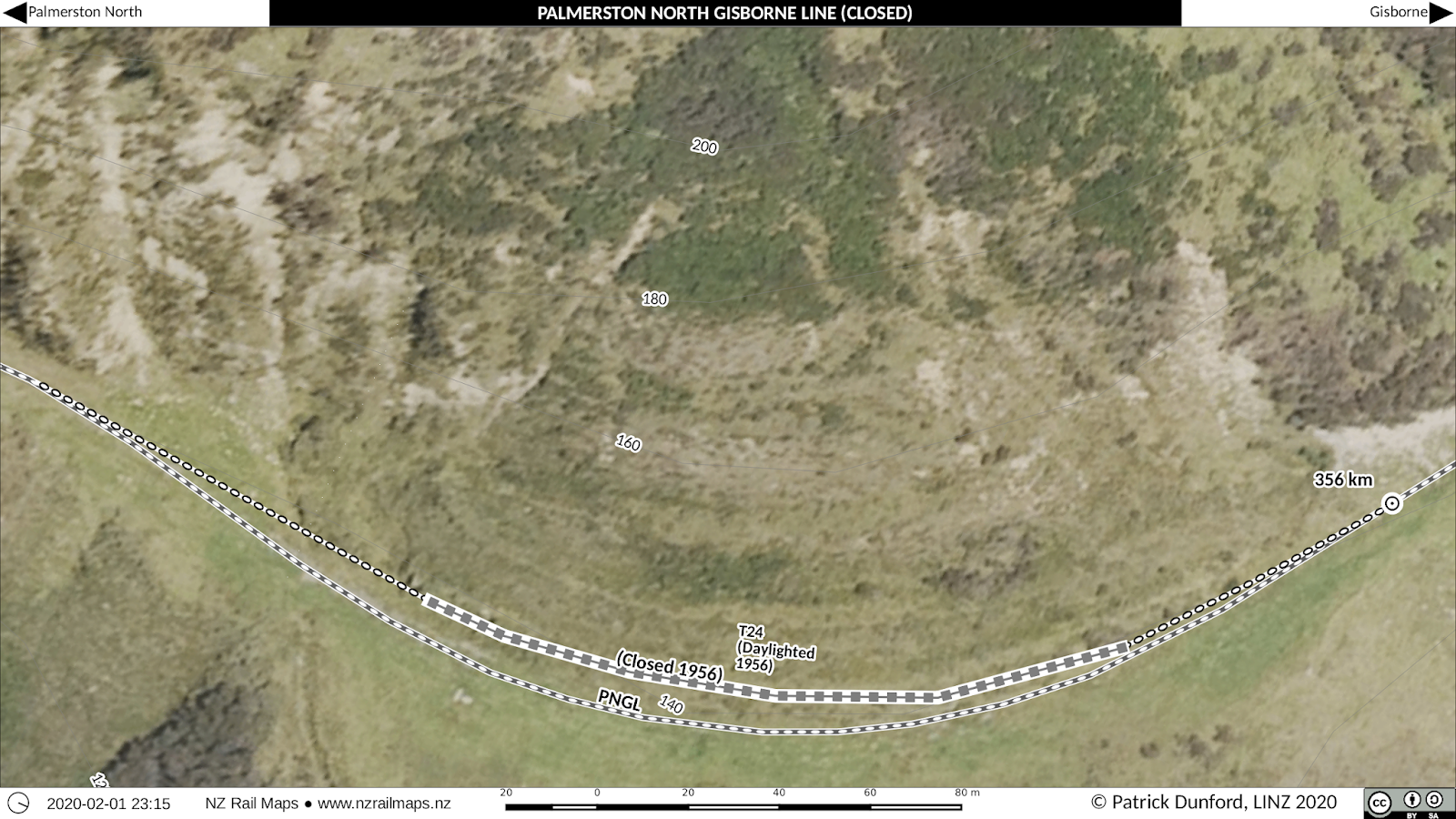 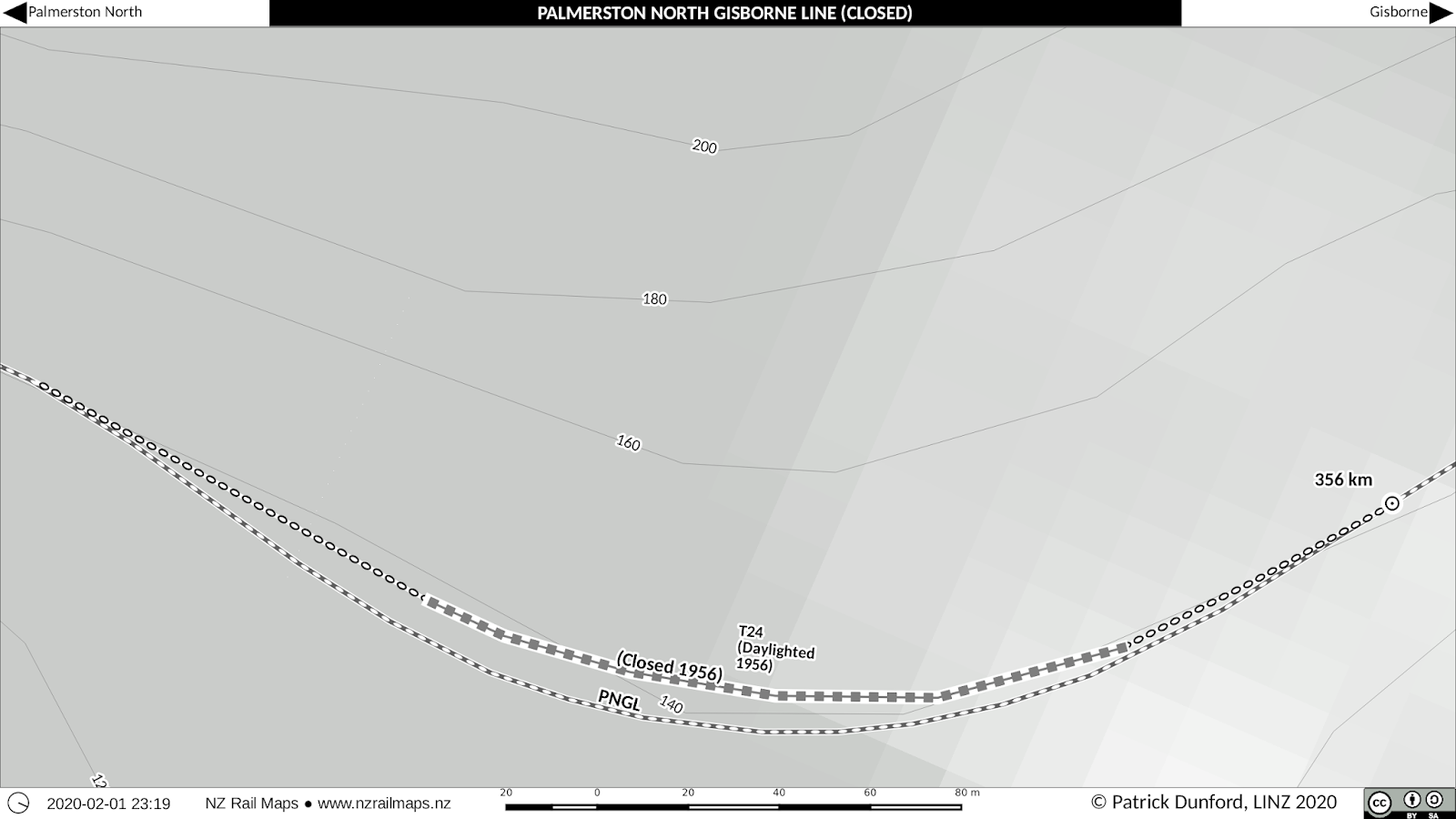 Tunnel 24 original route and diversion. The aerial photo at the top was taken in 1942 during construction of the line and shows this tunnel as it was built at the time. It was only in use for around 13 years. 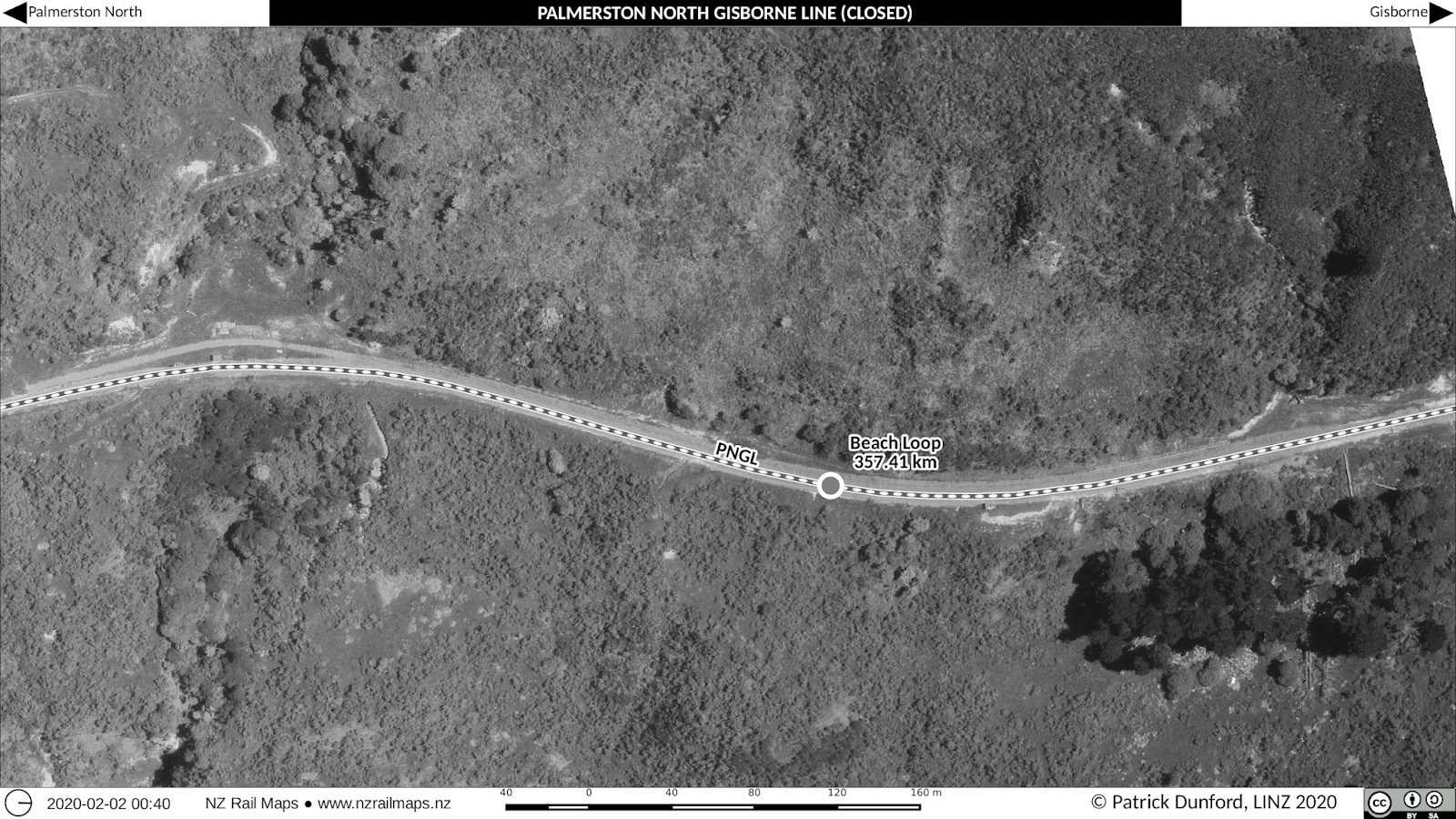 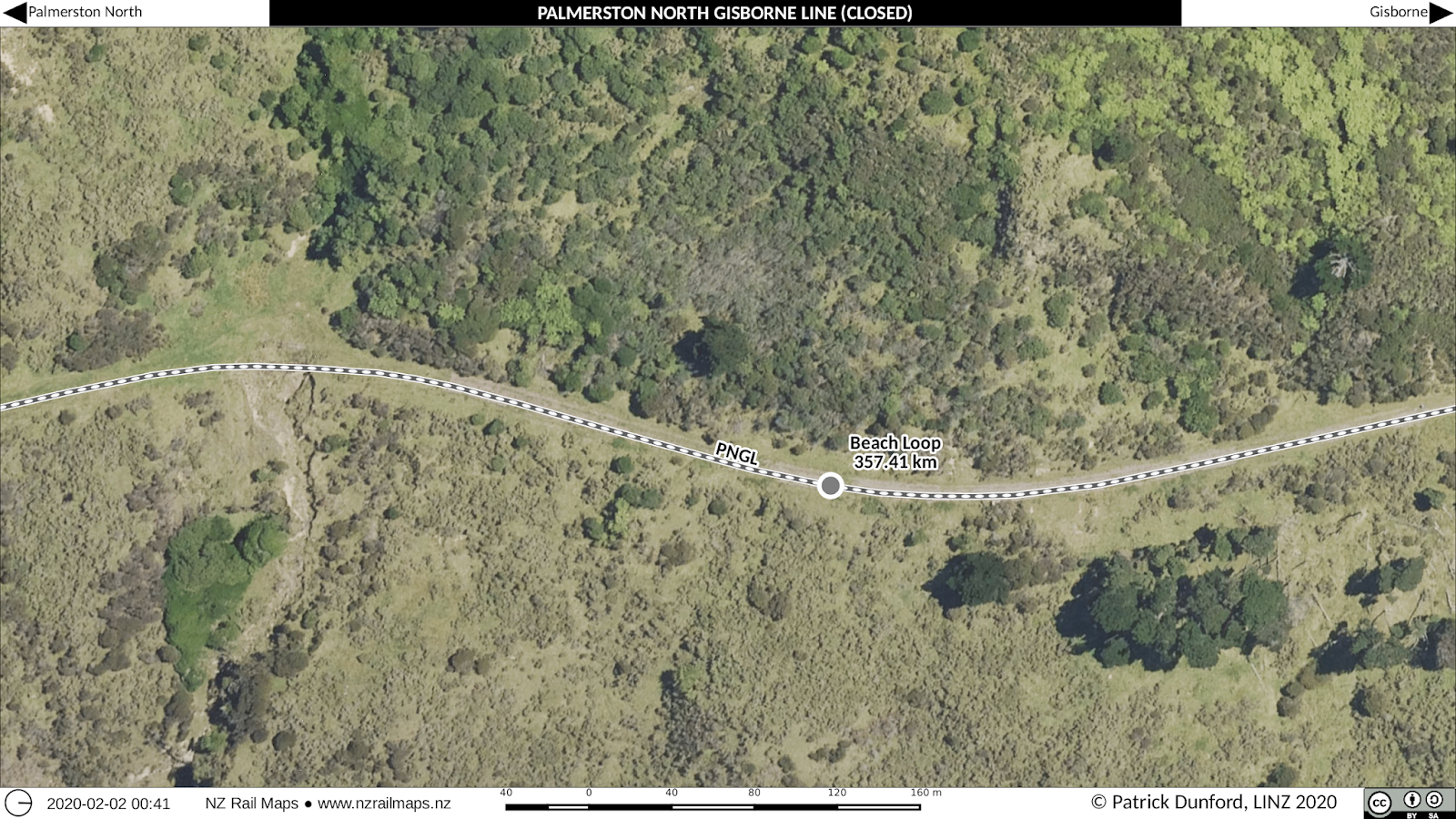 Beach Loop itself. The black and white aerial is from 1986. The track layout consists of a loop with a backshunt at the south end. The station was often in use for stabling work trains due to the intensive needs of maintenance in the area, and was also provided with water vats in the steam days. Beach Loop was originally called No.2 Crossing Loop and was never open for any type of public traffic. The earliest S&I diagram for the area is No.590 for Waikokopu-Gisborne issued 1943, but which we do not presently have access to. It is unclear if local signals of any type were provided at Beach Loop but in 1968 the points at either end off the main line were shown as frame lever points without switchlocks, which was consistent with the way that main line points were labelled on other stations in the area, which generally had an L light on the automatic signals at each end. Switchlocks at that time were limited to isolated sidings between stations (service sidings, boulder pit etc). This seems to have been the norm for stations in the Whareratas area until TWC was introduced and they were all changed to the type of points controls typically seen in such area (TW lever lock).
Posted by Patrick at 01:42